Numerical simulation of gas dynamics and acoustics of rocket lift-off

It is known that high-intensity level acoustic loads induced during heavy lift launch vehicles lift-off can damage the vehicle heavy lift launch vehicles lift-off payloads. This problem makes the noise level reduction during the lift-off highly relevant. It leads to the necessity of the accurate prediction of acoustic loads. This goal can be achieved by using both experimental and numerical methods. Experimental investigation is very expensive, making it acceptable mainly for small-scale models, whereas the accuracy of numerical simulation is limited by plenty of factors, e.g. approximation order, computational costs, etc. So small-scale experiments can be used for the verification of numerical models, and numerical simulations should be applied for small-scale experiments scaling on real-size equipment. 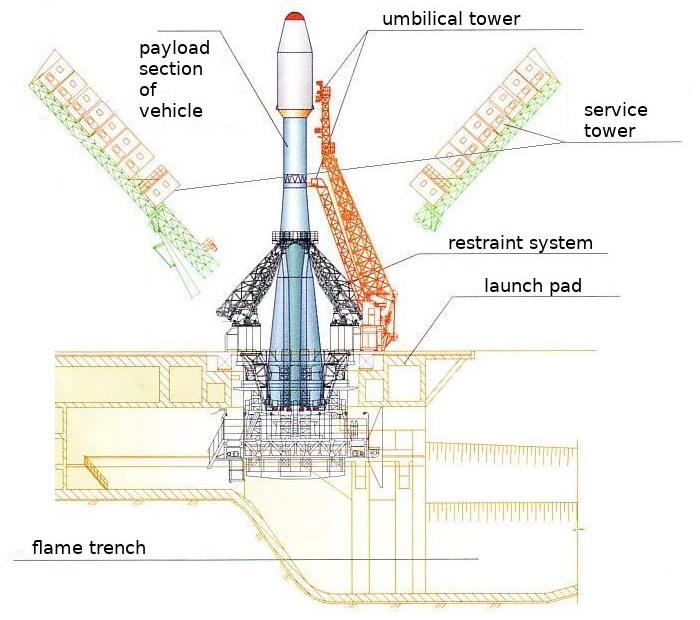 Fig. 1. Scheme of the launch pad for the vehicle “Soyuz”.

High-power acoustic waves are emitted by supersonic turbulent jets going out from the vehicle nozzles. State-of-the-art CFD techniques, like LES or DES are known to reproduce many non-linear effects with acceptable accuracy in the region of interest (near-field in proximity to jets).

An alternative way is hybrid model usage (see fig. below). Region of interest is split into two subregions called near-field (and far-field. Full CFD simulation is performed only in the near-field region where fluid flow is essentially non-linear. In the far-field the convective motion of the fluid is negligible. So, acoustic waves propagation can be described by linear second-order wave equation with constant coefficients. This equation can be solved using for example, boundary integral equation methods. It allows to reduce dimension of the problem to be solved numerically, which decreases overall computational cost. 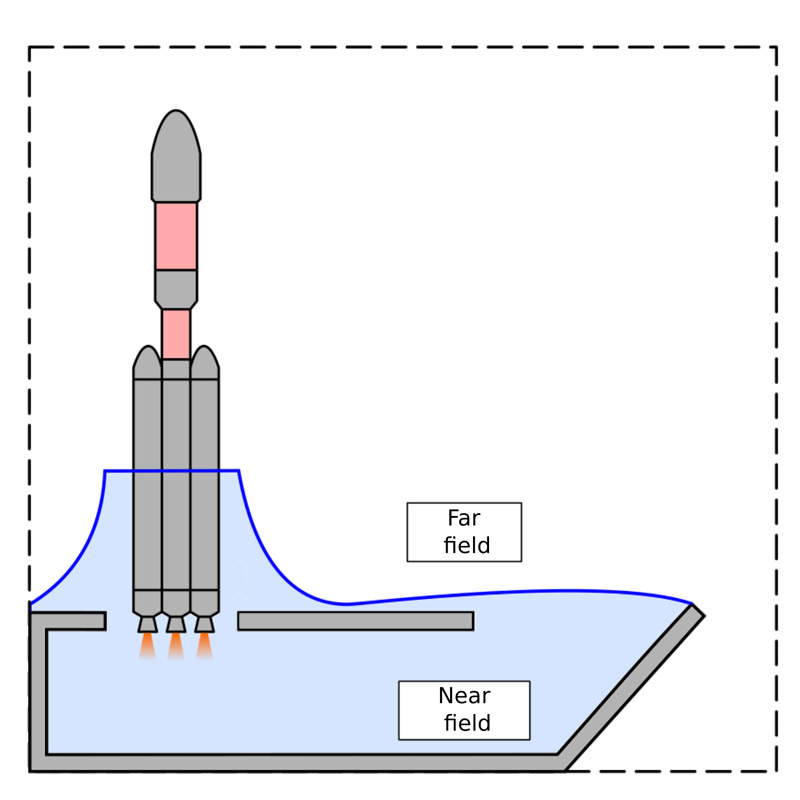 Fig. 2. Scheme of a hybrid technology of noise prediction.

It is necessary to сhoose the optimal mesh resolution for correct simulation both supersonic plumes and acoustic waves. We can estimate it with analysis of numerical solution of test cases which has an analytical solution or cases with high-quality experimental data.

The hybrid method of modelling of compressible flows in the wide range of Mach number (implemented using OpenFOAM open-source code) was the main tool for the modelling in the near field. Some test cases both for overexpanded and underexpanded jets were chosen for preliminary estimation of the mesh size. 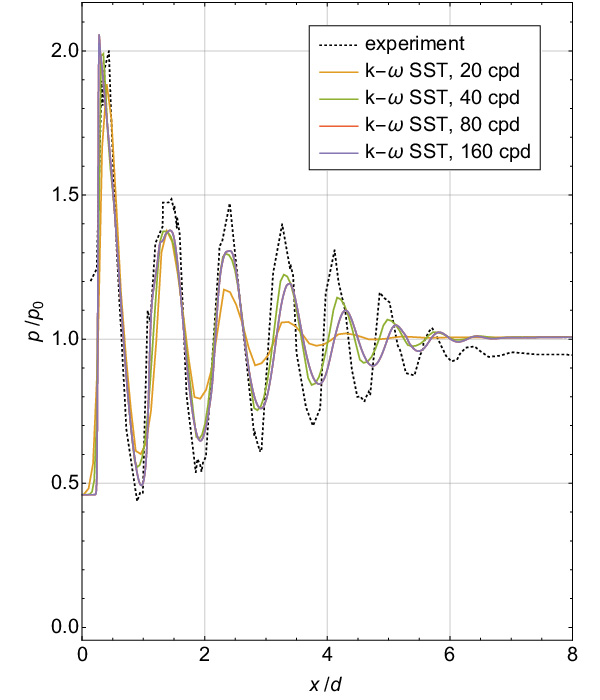 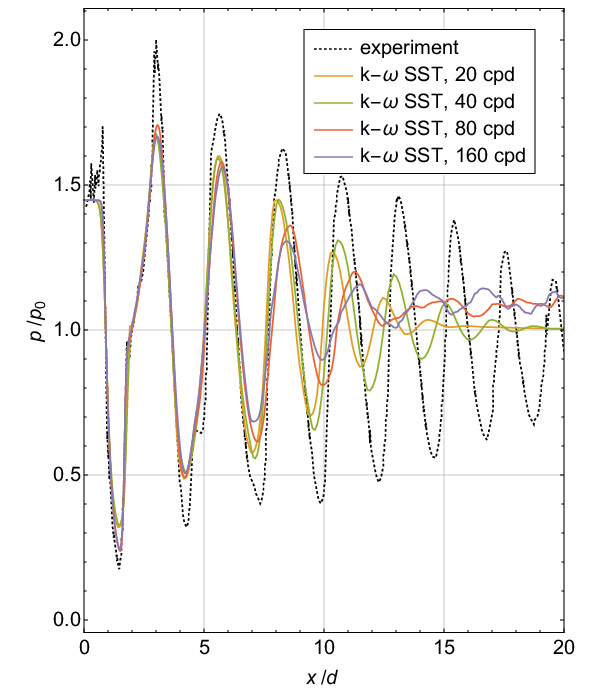 Fig. 3-4. Mesh convergence for the test case of modeling of the cold supersonic free jet from the defined nozzle, left to right: overexpanded jet, underexpanded jet.

The numerical solution has the good agreement with experimental data for two first “shock diamonds” when the mesh resolution exceeds 80 cells per diameter (cpd). Therefore, if the nozzle diameter is 1.5 m the maximal size for the correct simulation of supersonic plumes is

The next step is the modeling of the five turbulent plumes from the defined launch nozzles placed on the launch pad (see fig. below). The mesh resolution is chosen for the simulation of sound pressure fluctuations to 1000 Hz; the space step is equal to

= 0.01 m which is sufficient for correct modelling of supersonic jets too. To decrease the mesh size the only half of the flame trench chosen relative to symmetry plane was used in modeling; so, the total mesh size is approximately 35 mln cells. 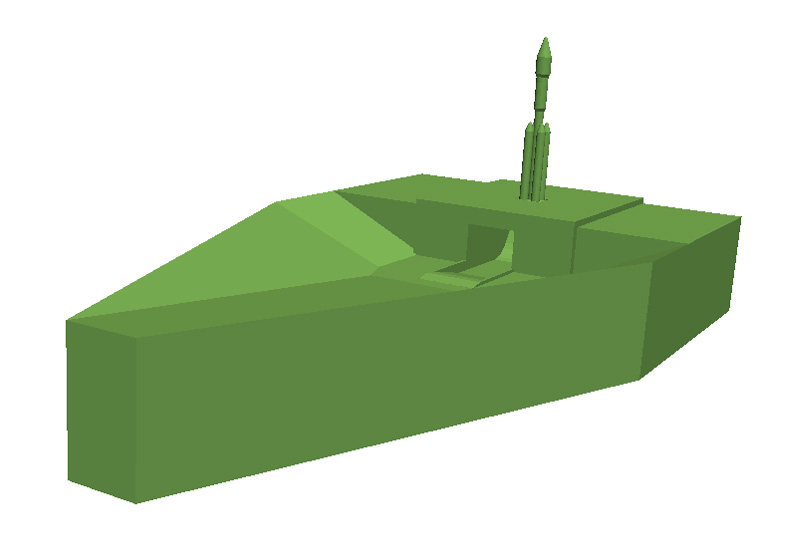 Fig. 5. Simple geometry of the large vehicle and the launch pad (model in SALOME). 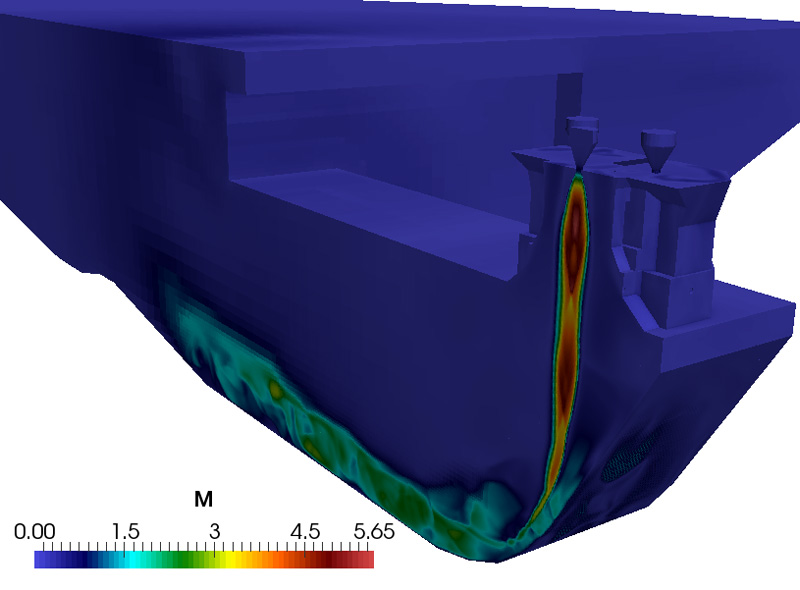 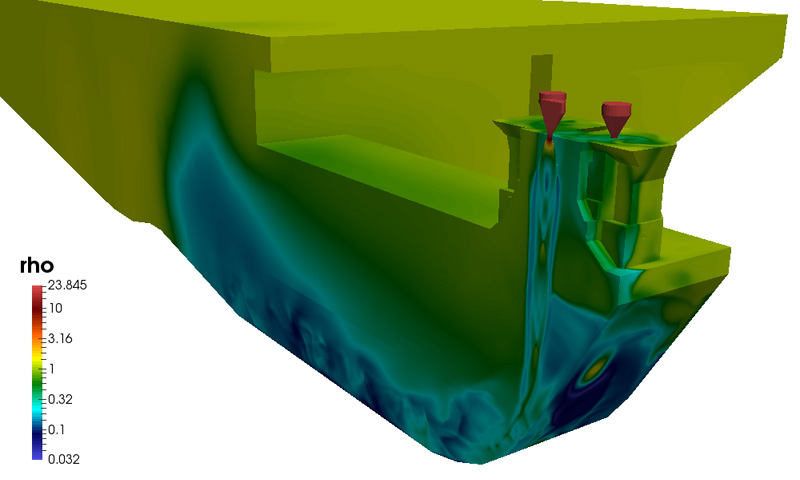 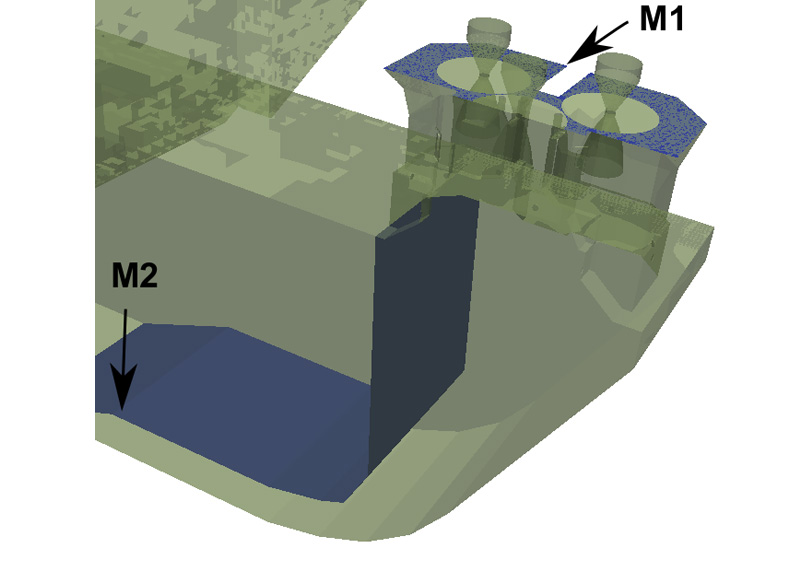 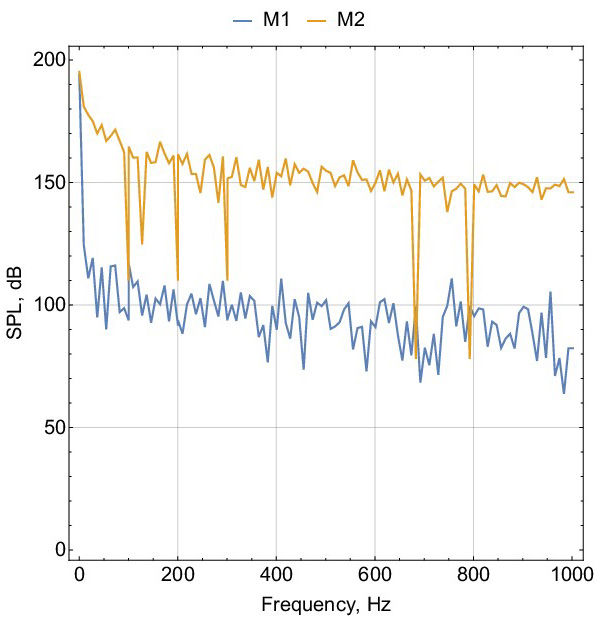